I am proud to be Canadian.  Canadians love hockey, right?  Let’s rephrase that to be accurate: many Canadians who are into sports love hockey.  Unfortunately for hockey night in Canada, I grew up a sci-fi geek with zero appreciation for any sports whatsoever.  This meant I became very unpatriotic when hockey interfered with Star Trek.  In May 2001 (when I was 13), major interference occurred.  The airing of the series finale of Voyager was delayed by a hockey game in overtime.  I knew that once the hockey game was finally over, Voyager would be the program we joined “already in progress”; I’d have to wait for a re-run to see the whole episode.

While I waited, I wrote this song (to the tune of “The Good Old Hockey Game”):

Is the worst game you can name!

And the worst game you can name

Is the bad old hockey game!

Tension grows, we sit in rows,

And await the treat of the night!

The adults call and the children fall,

Before the blaring screen,

Someone roars: “What a bore!”  It’s a dreadful hockey scene! 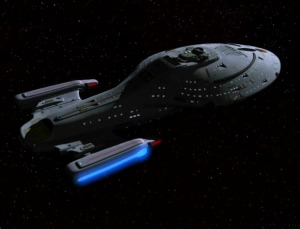 The Starship home to France?

Will the baby live?  Will Seven give

Her emotions one more chance?

Will Neelix come?  Will the doctor become a normal man on Earth?

We could’ve known, but the show’s been thrown into hateful hockey turf!

For them it’s all okay,

They mustn’t have their way!

We’ve waited long, so I sing this song,

In hopes of good TV,

We’re in suspense, but they’ve no sense,